I recently attended a seminar featuring the EFM32 Gecko processor from Energy Micro, an ARM Cotex M3 architecture based chip, with a focus on ultra low energy applications. I enjoyed the seminar a lot, though I'm not sure if that was due in part to the change of pace from my day job. The seminar was 20 minutes from my house, and attendees recieved a EFM32 starter kit. 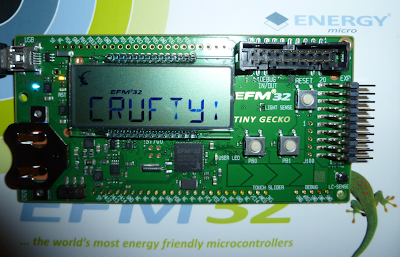 Energy Micro is a relatively new chip manufacture based in Norway.

The starter kit has on board:


It also features a Segger Jlink JTAG adapter that is also capable of using ARM "Serial Wire Debug" protocol. The Jlink can be used to debug off board targets too, though my understanding is that it is only enabled for use with other EFM mcu's. I'm curious to see what OpenOCD thinks of this JLink, I'm still looking for a cheap SWD capable device to program my LPC 11xx chips I bought last year.

As far as the EFM32 processor itself, I was pretty impressed with it's capabilities, it comes with a slew of peripherals standard, depending on the "family" of Gecko processor. LCD controllers and USB are avalable on the higher-end version of the chip. It has ADC, DAC, RTC, as well as the usual suspects for serial comms, I2C, SPI, U(S)ART, and USB. It also features a DMA (Direct Memory Access), something that allows peripheral controllers to access RAM without CPU assistance. It's something desktop pcs have had for at least 20 years, but seems very exotic for a "low end" microcontrollers. It also has some op-amps built in.

The seminar also had a rep from IAR, and there IDE integrated nicely. Being used to open source, non commercial tools, it was strange to me for everything to "just work", I'm used to a few hours of Googling and configured before I get anything to work :). The thing that made me giddy was the "Energy Profiler" that was possible because of the current sensing circuitry on the Dev Board, which I think also has JLink support. This let you run your code and profile how much power was consumed by each line of code. All the same, the version that comes with the dev board is the "starter edition". When I went to IAR's website to look for pricing info, and all I could was the "request a quote" button. For me that translates to "if you have to ask...".

The main negative to the EFM32 chip from a hobbyist perspective is form factor: it's currently comes in QFP, QFN, or BGA form factors. I swear however puts out a DIP ARM chip will have my admiration for life. The other major drawbacks are ones I've already hinted at. The open source tools support for this chip seems to be in it's infancy, at least with a quick web search. Also, the SWD interface is not yet well supported for hobbyist, even though I think it will eventually outnumber JTAG in popularity.