Success!
(For various values of  'success' at least)

I finally have the board physically put together:


After drilling the pcb holes for the .1" headers, I am now certain that surface mounting was the way to go for the daughterboard. I never would have been able to get the accuracy needed with my uber cheapo drill press, it actually moves about 0.5mm when you apply too much vertical force to the press, so about half way through the job I realized that slow drilling was the key to better accuracy. Still, I don't think I could pull off drilling holes for 0.05" headers.

To do a surface mount solder, I "pre-soldered" the pads where the board would be sitting: 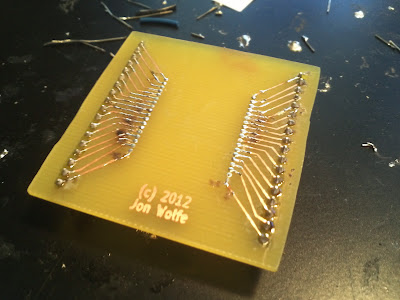 I then applied liberal amounts of flux to the pads. Flux really is key to getting decent solders, it took me a while to realize just how important it is. Then I carefully placed the daughterboard on the pads. I melted a small amount of solder on my iron and then used the iron like it was a paintbrush, and carefully "painted" solder into the daughterboard grooved pads.

I did extensive connectivity testing throughout the process, but I did not test it after final assembly, because I wasn't sure what kind of voltages my meter was using, and I didn't wan to risk damage to the Wifi module from accidental reversed polarity.

Anyways, I've got a pic24 with 128k of flash, and I'm switching over to software mode for the next step, to get the Microchip TCP stack up and running. This is my first venture into the PIC line of MCU's, so there's a little getting up to speed. I will say that I just installed MPLAB x, and it is a *huge* improvement over the old MPLAB IDE.

Posted by Pedantite at 6:47 PM