As a technophile, I think we're living in some pretty exciting times. (Wait, does "technophile" mean I like glow-sticks and pacifiers, or gadgets and software?). I think we've only hit the tip of the iceberg so to speak, in human progress, I often wonder what life will be like 500 years from now. Will this blog be archived on a microscopic chip containing all web content of the 21st century? Will a server in a city in a Martian colony house such a chip? Who knows? I probably wont, unless the secret to immortality is unlocked in the next 50 years or so (not necessarily so far fetched, either, wow!)

Anyways, there are some pretty big hurdles to overcome before we achieve total technological enlightenment as a species, and I think currently, there is no bigger obstacle than power and energy. The predominant technology in use for alkaline batteries has not changed significantly in over fifty years. What other area of technology has progressed that slowly? Oh wait I know, the other predominant portable energy-store, petroleum based fuels. Gasoline is pretty much the same thing folks were using 100 years ago. Why has nothing better come along? Well, the old technologies have a lot of benefits that have proven difficult to exceed in all aspects: simple, cheap, safe(relatively speaking), and dense. It's hard to beat the energy density per dollar of a AA battery or especially a gallon of gas. The problem is that they are not good enough, and will only hold us back. I don't have the answer. If I did, I'd probably not be putting it on a blog, but programming atmegas sipping mojitos on a Martian colony financed with the trillions I made cashing in on my solution (maybe I'd even break down and buy a Windows Phone, I do want one).

Somehow this post developed into an offbeat segue into what I really wanted to mention in a short post...

In researching mobile power options and designs for future projects, (2012 is the year of the robot, I mean it this time!), I ran across this on Hack a Day. A clever device utilizing a boost converter to suck the last drops of juice from a pair of AA's. This is not unlike, in principle, the myriad "Joule thief" type circuits various people have built and documented on the Internet, but I'm particularly impressed with this guy for a) putting together such a well thought out design, and b) turning this idea into a product. Check out his his blog about it here. 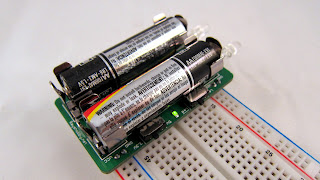 The utility of the device is extremely well thought out, you can use it as a raw power source, but there are also placeholders on the pcb to turn it into an led flashlight, or a breadboard power supply. There's an on-off switch as well as a switch for selecting 5 or 3.3 volts from the regulator. There's also an led power-on indicator.

The fact that he turned his passion into a marketable product, however is probably the most inspirational thing to me. I'd love to turn my hobbies into something that is financially rewarding as well as soul fulfilling. I'm going to pick up a few of his converters with next my next hobby budget cycle.

Email ThisBlogThis!Share to TwitterShare to FacebookShare to Pinterest
Labels: Electronics