Life is what happens when....

I probably wont get a real post out this week. No, it isn't blogapathy, life and work is a little hectic right now.
Next up will be my game announcement though. Then maybe I can get back to hacking :)

Email ThisBlogThis!Share to TwitterShare to FacebookShare to Pinterest
Labels: Metablog

All developers are familiar with the infamous "//TODO" comment in code. It means "I know this code is not finished and will need work", or "I have deadlines and Fred's code is broken so this is the best that can be done until he fixes his library".  The problem is that these thing can linger forever. I know, I'm guilty of it myself.

(Fred doesn't work there anymore, by the way).

Amongst the many code quality techniciques and policies, such as unit testing, treating warnings as errors, and using static analysis tools, I propose a system for dealing with a "TODO" - something that has been identified as needing rework eventually.

In my Android Game, I have recently started using a class to denote such beasts. Behold:


The main disadvantages are:
A guide to setting up your x86 virtual machine can found here: (It takes less than 10 minutes) Install Android Froyo on PC
Launching Android-x86 is not automated like the emulator and ADB takes slightly more effort to setup, but it's not hard. So here's my quick-start guide
Read more »
Posted by Pedantite at 10:43 AM 4 comments:

My Android game is still 'coming along'. I'll be making an announcement post soon. It's consumed most of my late evening "dad time", I haven't touched a soldering iron in a while, I'll make up for lost time later.

Recently, I was reworking my texture management code in my "engine" (if you can call it that, it's really just a few folders of Java files with a focus on lower level Graphics and my own Collision detection). I wanted to add the ability to have "dynamic" textures, ones that could be created and modified in the middle of a game in progress. Android has been fun to work with, but the there is a dearth of documentation when it comes to the 3D stuff, you are typically refereed to external Open GL ES docs, or to the SDK samples, which invariably don't do what *you* are trying to do.

Disclaimer: Though I have been in the video game business for a long time, I have rarely done low level graphics rendering work. I would not consider myself a guru in that area, so take this post as food for thought and not as an authoritative doctrine. If you think I'm wrong on something, call me out!

We inherited 1/2 a swing set from our neighbors. Last weekend, I turned it from this: 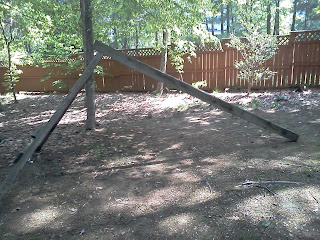 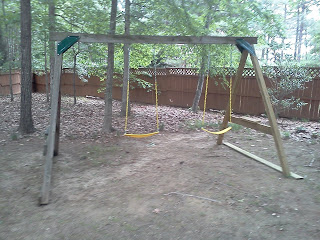 Alright, this isn't at all electronics or programming related, but it is still "hacking" in a form. The local hardware store doesn't stock parts for this purpose, they only sell "playground kits". It's mix and match, but they assume that you are buying a complete swingset, so they package some important parts in the big expensive kits, and don't sell them "loose". So I was on my own. At least they sold the actual swings separately, but I did have to make a return trip when I realized they did not come with hooks to mount the swing chains to the frame.


Posted by Pedantite at 2:20 PM No comments: