The main disadvantages are:
A guide to setting up your x86 virtual machine can found here: (It takes less than 10 minutes) Install Android Froyo on PC
Launching Android-x86 is not automated like the emulator and ADB takes slightly more effort to setup, but it's not hard. So here's my quick-start guide
Steps to get ADB working over TCP/IP on Windows
Step 1: Find the IP address of your Android device.
We need to know what IP address to point ADB to. Unless you have set up your Android-x86 to have a static IP, you'll have to dig a little to find out what it is.
Open the "Dev Tools" app and run the terminal terminal emulator. 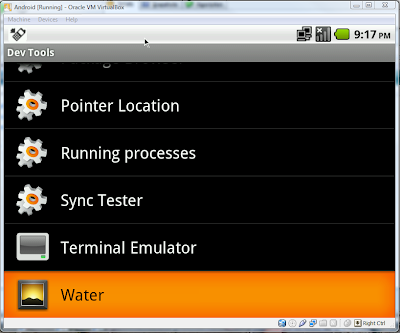 You should see a blue shell window.
Type:
su <enter>
ifconfig eth0 <enter>
The output of the ifconfig command should give you the IP address of your device. 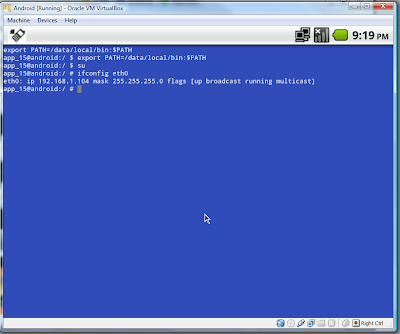 Remember that ip address.
Step 2: connecting ADB
Open a DOS box.
(Note this assumes that the Android sdk is in your DOS path, if not you must type the full path to adb.exe)
Type:
adb kill-server <enter>
adb connect xxx.xxx.xxx.xxx <enter>
where xxx.xxx.xxx.xxx is your device's IP address from step one. 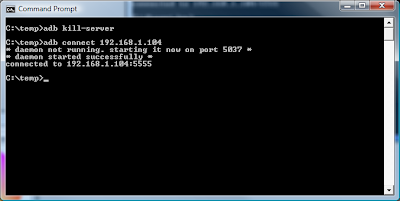 To verify it is working, try typing:
adb shell <enter>
If it's working you should get a "#" prompt.
And there you have it.
--P


I am working on switching Sedition to use OpenGL ES 2.0 with programmable pipeline support. OpenGL  ES 2.0 is not supported as of this writing in the Andorid emulator supplied with the SDK. The Android-x86 website claims that the latest version (2.2 r2) supports OpenGL ES 2.0. Sedition has never run fast on the emulator, but it run well enough(4-5 frames per second) to test some of the features. I discovered soon enough that when you configure your app for 2.0, it fails to create a render surface on the emulator. I'll make a new post and update this one once I get the latest Android-x86  up and running.
[Update 7/30/11]

I tried x86 Android 2.2 r2 under Virtual Box, and with a few quick tests, it does not appear to support OpenGL ES 2.0. I get the configChooser "no configs match configSpec" exception  when I try to create the GL render surface, which is exactly what the SDK's emulator gives me. I guess I'm developing on real devices for the foreseeable future. Android x86 no longed provides a "generic" iso, so I tried the "eepc" build. It may be that another build has better GL hardware support.
Posted by Pedantite at 10:43 AM