Eggbot and sparking the inner geek in kids.

For the past few years, my wife has taken on the task of organizing our local "spring party", usually themed around eggs, and targeted at preschool and younger elementary school-aged children in the neighborhood. This year we were vacationing in beautiful Costa Rica over the Easter break from school so we held the traditional party a little late - this past weekend. It worked out great because we got a lot of eggs at fire-sale prices!

My wife has an engineering background, and she's getting ready to go back to school for a Masters degree in education, so she can't help but mix the two passions. This year's party was about science, engineering, and of course, eggs:


She had a lot of science and engineering themed experiments and demonstrations prepared:  she dissolved the shells in vinegar, demonstrated osmosis by inflating/deflating (if that's the right term) the shell-less eggs soaked in various liquids. And of course, she demonstrated the structural strength inherit in eggshells through their shape. She stopped short of deriving the Von Mises stress, only because they were second graders, and it was time for a bathroom break.

She roped me in asked me to help out this year by demonstrating for the attendees my EggBot that I got as a gift last year. The Egg-Bot is a really neat idea, it's essentially a CNC-plotter that can work with spherical or ellipsoidal objects and draw or engrave vector drawings made in Inkscape. 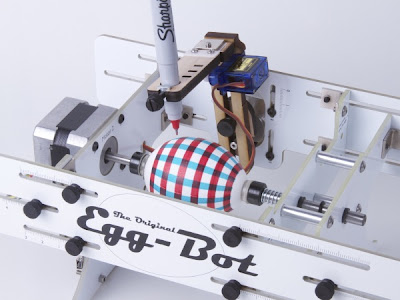 I setup a table with a laptop and the Egg-Bot:


Kid's don't appreciate the term "CNC" or "plotter", so I just called it a "robot", in this pre-apocalyptic, pre-singularity world, that term still has a positive connotation. I explained how it worked, and I took turns writing their names on eggs for them:


Anyways, it was a lot of fun, and I've been so busy that I had not really had a chance to play with my Egg-Bot until now. Several of the children immediately informed their parents that they needed to invest in an Egg-Bot of their own. Science.