I started a new project recently, a reflow oven. This time, I've started with the physical build, and the software side of it will lag behind. I've laser cut the case I designed in OpenSCAD, and I couldn't be more pleased with the results.

I have some projects in R&D for Anibit, and I'm going to need to whip up some PCB's. I need a reflow oven, and I'm going to recycle an old toaster-over. I was inspired by this project, which was in turn based on osPID. The touch-screen was something I've had lying around, waiting for a project.

What I really liked about OpenSCAD was how parameterized I could make my design. The front face was angled back. I had a single parameter I could alter in my script, and all affected parts would be re-calculated accordingly. With a traditional graphical cad tool, I'd be re-editing all day. Here what it looked like in OpenSCAD: 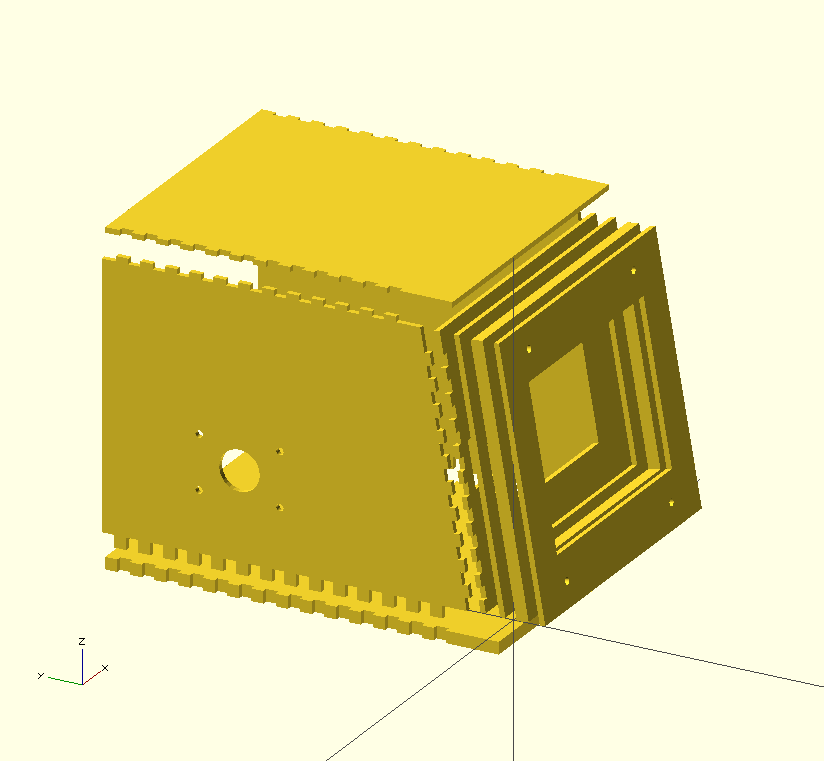 The electronics will be AVR/Adruino based (a AtMega 1284/644 variant), and use an Adafruit thermocouple breakout, and an ebay USB serial adapter. I think I'll socket the chip on a rat's nest perf board, I'm debating whether or not to include JTAG in-circuit, or just rely on an Arduino bootloader (I made some nice 1284 bootloader mods for my Sanguinolulu in my CNC)

Most of the work is going to be on the software side. I'm going to re-do the LCD logic to use the graphical touch screen, and I want to have real-time target vs actual temperature graphs, and maybe even on-device programming.