After many months, and even a good deal of schedule slippage, I uploaded my game, Sedition, to the Android market. You can find it here:

I also have a Blog dedicated to my software endeavors, DigitalPopcorn


(Apologies to anyone reading this who might not be able to access it in the Android Market, I plan to expand offer to additional countries soon, as well as other distribution channels.)
Anyways, it is still in "Beta", but here is a run down of some of the technical/design details of it:
- 2D space shooter, using 3d Graphics, entirely in Java and using Open GLes.
- right now, about 15k lines of code (including whitespace/comments, I think around 8k without)
- Using Google Analytics for end user metrics (with end-user permission)
- 30 Levels/Waves with 100 Planned, modulus 5 levels are bonus levels (maybe "Boss" level in higher levels)
- Keyboard and trackball support (touch is the prime targeted input method).
- Using Jet Creator system for in game music (still not happy with it, I may scrap the music one day)
- Levels/gameplay "Logic" is managed via an internal "scripting" system I developed. Right now script "Logic" blocked are created and linked together in code, but I have toyed with the idea of making it data driven(hopefully not too hard, since I have kept that goal in mind when developing the scripting)
- In-game feedback that piggybacks on Google Analytics. Users can select from multiple menu in game to flag a level as fun/not fun/too hard/too easy: 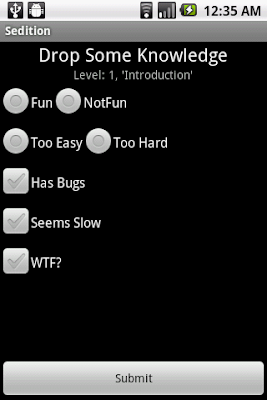 - "Distinction" system of accomplishments, in the after game report screen, progress is saved, and may be posted to Facebook and Twitter feeds.
- Tutorial system, driven by scripting blocks.
- 3D models are quake2 file format, I wrote my own processor based on published md2 specs, key frame animation is supported as well. (most of what the game is doing on the loading splash is processing md2 files, on some devices this is really fast, on some, and the emulator it is very slow. I have a static flag that I set to skip loading if I'm testing app features that don't require actually playing the game)
I could go on, but I think I'll save it for another post :) . Tonight was supposed to be an "off" night, since I really pushed myself latly to get this out the door. I was supposed to get to bed earlier, catch up on sleeep. What to I do? I blog about the Game.... and now it's late...
-P
Posted by Pedantite at 12:53 AM