Last month I mentioned the ATDH1150USB Atmel CPLD JTAG programmer, and my efforts to home-brew my own programmer based on some ancient code I found on Atmel's website.

The escalating level of effort required to make my own programmer outweighed the $45 it cost to just buy the Atmel programmer. Slightly annoying, since I already own an Atmel branded JTAG device, the AVR Dragon.

There's scant information on the web about the 1150, unlike it's popular Altera cousin the "USB Blaster".

Here's the hardware that came in the box:


The first thing I did was immediately void my warranty(does this thing even have one? I have no idea, I'm guessing that the folks at Atmel would be laid back if I ever ran into issues, this isn't a consumer device. )

The box is a heavy duty looking aluminum enclosure:

It's got 3 connectors for target cables:

Oh yeah, I did mention something about voiding the warranty: 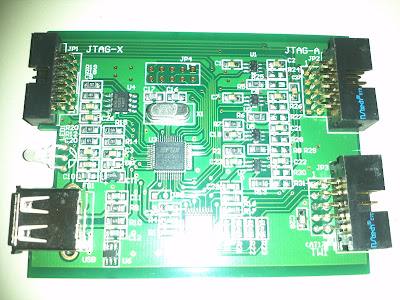 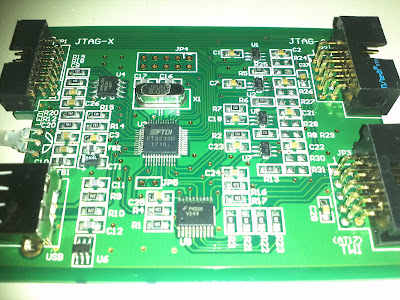 The thing that jumps out at me is that this it an FTDI FT2232D based JTAG programmer. This is probably one of the most common chipsets in use at least in hobbyist-accessible JTAG devices. In fact I've already got a couple of other FT22XX based JTAG programmers, and I'm eyeballing another one (really it's the SWD that I want in that one). It's a shame that with so many programmers that are so similar, there couldn't be a unified standard for all FTDI based programmers. There's probably little motivation at the corporate levels for such unity, and these things cost chump change to the main stream professional JTAG device customer.

PS, the link I mentioned above did tell me that it was a FTDI based device, but I didn't find (or notice) that link until after I had opened mine up.