I haven't posted in a while. The lulls usually happen when I'm busy. I've failed you, my adoring fans, and for that I blame... um squirrels..

I have been happily jamming away for the past couple months on my robot, Zaethira. (Which is a concatenation of my kids' and wife's names, and happens to sound geek awesome, the geekiness of the whole is greater than the geek sum of the parts).

Anyway, I could have written a 20 page blog post about how things are coming along, but I think a diagram does a much better job. I made the below because I needed to get a handle on where I needed to focus and what I planned to do. This diagram made me realize how flipping complex this project is. 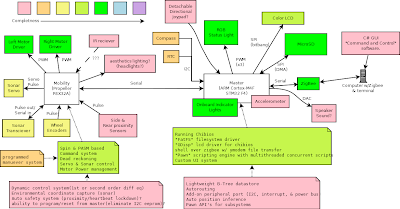 Here's a couple of key points: