This was probably my biggest, most ambitious electronics project I've done so far. (And also one of my first)
It was inspired by this:
http://www.instructables.com/id/A-Word-Clock/, which in turn was inspired by: http://blog.makezine.com/archive/2009/09/qlocktwo-clock-tells-time-with-word.html.  (I see that the guy who did the instructables clock has since done new version of it, it looks really nice.)

Anyway, here is mine:

(This is another retrospective post on an older project, that is also still a work-in-progress, so I'll try to post as much detail as I can from memory. Some of my reasoning for doing things a particular way might be long forgotten, for everything else, I plead temporary insanity)

I know a lot of people like details, details, details, so my plan for documenting this project is this: this post will be a high level overview, with maybe 3 or 4 future posts that will get into some specifics on some aspects. I've already started working on some schematics just for this blog. I don't currently consider it done, I have a couple flaws in it I want to fix, and some other features. Any feedback is appreciated.

It is a "word clock" that tells the time by illuminating a combination of words to "say" the time. So, for instance at 10:35 PM, it will display the words "TWENTY", "FIVE", "TO", "ELEVEN", and "PM". It has a "resolution" of five minutes, ie it only tells the time to the nearest five minute increment. The inspiration for the idea came from the posts I read, but the design and code is 100% mine.(excepting maybe sample code snippets here and there, since this was for personal use, I wasn't too strict about that). My design adds a few features too.

The basic features are:


I am debating adding a couple other features:

I learned a lot about electronics doing this project, one of the "flaws" mentioned above was that the power consumption seems higher than I think it should be, but I've never dug too deep into it. The linear voltage regulator at times gets too hot to touch. Also, I learned the hard way to have solid plans for physical construction, to not just think about how pieces would work together, but how the construction and assembly process would work. The thing is a royal pain put together.

The clock runs off an AT91 Sam7 256, an  Arm7 TDMI processor from Atmel. I wrote the application in C using the Yagarto Arm tool-chain. There was some bootloader code in assembly I tweaked from samples. I tend to avoid assembly code, and this project was my first exposure to Arm assembly, it wasn't too bad.

No Arm chips I am aware of come in a DIP form-factor. So I used a "Header Board", by Olimex, sold here by Sparkfun in the US. The Sam7 256 is a 3.3 volt chip, and all I/O pins are 5 volt tolerant. Atmel's documentation in general is pretty good, this chip is no exception, so all in all it's a nice beginner's Arm chip.

In addition to the Olimex board,

As usual, it is a rat's nest on a perf-board, but I'm pretty happy how relatively organized it turned out, considering that it's a pretty big circuit, I think I estimated over 500 solder points.

Check out the action shot here: 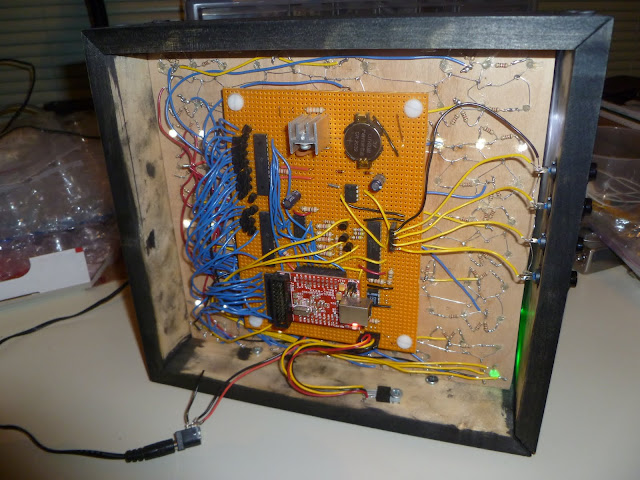 The lettering layout grid was designed in Qcad.  I intentionally made sure the panel layout would fit inside a standard (American) 8.5" X 11" piece of paper, so I could print the lettering on transparencies myself. Here is  an early draft of the layout: 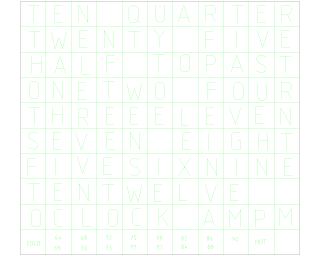 I used this to plan the placement of 110 5mm LED's on a quarter inch thick piece of plywood, which I then secured with hot glue. (The hardest part of that was finding a time to the noisy drilling in my attic "man cave", I do most of my hobby work after my wife and kids go to bed :) )
My original plan was to use "dividers" to prevent light from leaking between the words, I got some heavy posterboard and cut into strips that I fashioned into a grid. It looked like crap, and the LEDs I used had a pretty narrow illumination angle, so I scrapped that idea.
Next, I designed the lettering itself and printed it, "white" letters onto a black background, on to a  transparency. The transparency was then covered with a plain piece of white paper, and a semi-transparent piece of plastic I cut out of a paper binder I bought at an office supply store. I wanted to have the letters obscured when they were not illuminated, so that they would seem to pop out.
The frame cut from some 1X4 poplar boards and stained black. (I would re-use that idea later when I did the Good Times timer). I then used a dremmel to cut a groove around the inside perimeter of the frame that would hold the "face" layers of the clock. This idea didn't work as well as I wanted, an I learned a lesson about testing feasibility of ideas before I progress too far with a design. I'm also not a great wood worker, I get impatient with it, which is odd, because I have considerable patience when it comes to diagnosing software problems. The miter cuts were awful and it does not fit together good enough. This made assembly hard, and you can see light leaking through the corners. I learned in the futures to go toward designs where the wood work does not need to be so precise.
So there you have it. Like I said, more to come, I've got some schematics in the works, and I shot some video of it in action, stay tuned...
Next time, I want to get into details on how I used some of the chips I mentioned in this post.
--P
Posted by Pedantite at 1:27 AM